In 1958, illustrator Fiep Westendorp started making illustrations for the stories that Mies Bouhuys wrote about her own cats Pim and Pom. These stories, nursery rhymes and dialogues were published on the children’s page of the newspaper Het Parool during a period of ten years.

Fiep made up her own version of cats, with an oval-shaped head, nose and eyes like three dots on a horizontal line, very short legs and a short tail. A real ‘Fiep-cat’. 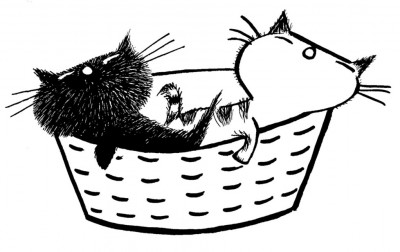 In 2003, while busy archiving Fiep’s illustrations, Gioia Smid found bags filled with drawings of Pim and Pom in the bathroom cupboards at Fiep’s home. Fiep and Mies came to the conclusion that much of the material had never been published in book form, and so in 2014 a new book was published: ‘Pim Pom remain friends’. Around the same time the idea to create an animated series was born.

As Fiep Westendorp died in 2004, she unfortunately did not live to see Pim and Pom come to life, but Mies Bouhuys did watch the first episodes of the series before she died in 2008 and was very excited about them.

The animated series about the two cats won several major awards, including the Cinekid Kinderkast Jury Award (both in 2010 and 2011) and the Cinekid Kinderkast Audience Award (2013) for the best children’s television program. The series has been sold to several foreign television channels, so that children in for example Japan, Scandinavia and the Arab countries can enjoy the adventures of the two cats as well. Pim and Pom also have their own app, stuffed animals, DVDs, table ware and books. In 2014 they played the main roles in their own movie. 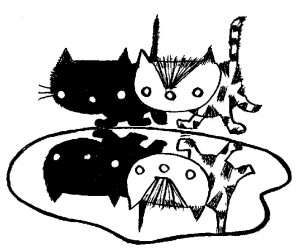